Where is the best place to sit in a 4K UltraHD cinema?

When does 4K make a difference? It’s an important question for producers who may be wondering if it’s worth the added hassles and changes to workflow that this new technology brings. When is 4K too much?

We’ve written before how Sony have a lot riding on 4K. While other companies such as RED have pioneered the cameras and technology behind 4K, as the only end-to-end supplier in the industry it’s in Sony’s interests to really push it.

So, a couple of years ago they published a piece of research to advise cinemas upgrading to 4K projectors. It makes interesting reading.

In their words “Some have suggested that 4K is only meaningful for very large cinema screens. In fact, screen size isn’t the true measure of an audience member’s ability to pick out detail. The true measure is the relative distance from that person to the screen, the viewing distance. On paper, 4K is obviously the superior solution. But what about the real world? Will the ticket buying public actually be able to perceive the benefits of 4K resolution in actual theaters?”

Well they (naturally) argue that yes they would even in smaller cinemas, the reason being, it’s not the size of the screen that matter but the viewer’s position relative to it. If you’ve ever experienced an occasion when you’ve had to sit right at the front in a cinema, this (aside from the neck strain from having to stare upwards) is why the experience is so poor.

There’s a generally accepted rule that the average person can “reliably” see 44 pixels per degree of vision. To quote Sony, this means:

“The most desired seats for the most enthusiastic ticket holders are roughly 1.5 Picture Heights from the screen. At this distance the viewing angel is 37 degrees. The relaxed reference of 44 pixels per degree multiplied by 37 degrees vertical equals 1628 pixels vertical.”

But this shortfall varies according to viewing distance. As in the front row scenario, sit closer and the shortfall becomes more severe. Sit further away and the shortfall will diminish, eventually to zero – the distance at which the screen is so far away, the difference in pixels can no longer be seen. However in smaller cinemas, that rarely happens and in many cases, most of the seats in the cinema are too close.

What Sony suggest in their research is that there is a benefit even in the smallest cinemas as audience members can be much closer to the screen and still see the optimum number of pixels.

But what their research also illustrates is that the difference in quality from 4K really does depend on the situation. The size of the screen compared to the size of the auditorium, the keenness of the viewer’s eyesight and where they are sat in the auditorium all have some bearing on whether they can spot a difference of not.

And all this has some considerable bearing on the success of UltraHD in a home environment where, traditionally, the viewer sits relatively further away from the screen than they would at a cinema. To really benefit from 4K, they will either need to sit closer to the screen, or buy a bigger one. Are consumers going to be up for that? 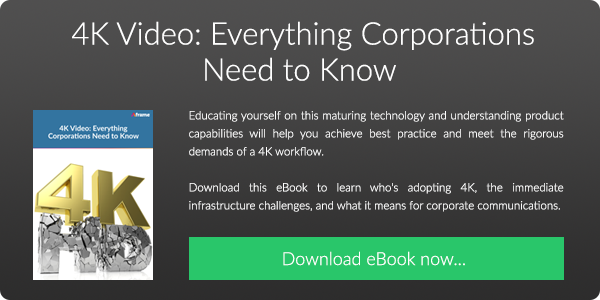 < back to blog home